Dharavi is a neighborhood in Mumbai considered to be Asia’s largest slum.  However, from the perspective of a foreigner there is hardly a noticeable difference between Dharavi and any other urban area in India.  Here, there are thousands of active people and industries with just as many honking horns and smiling faces. 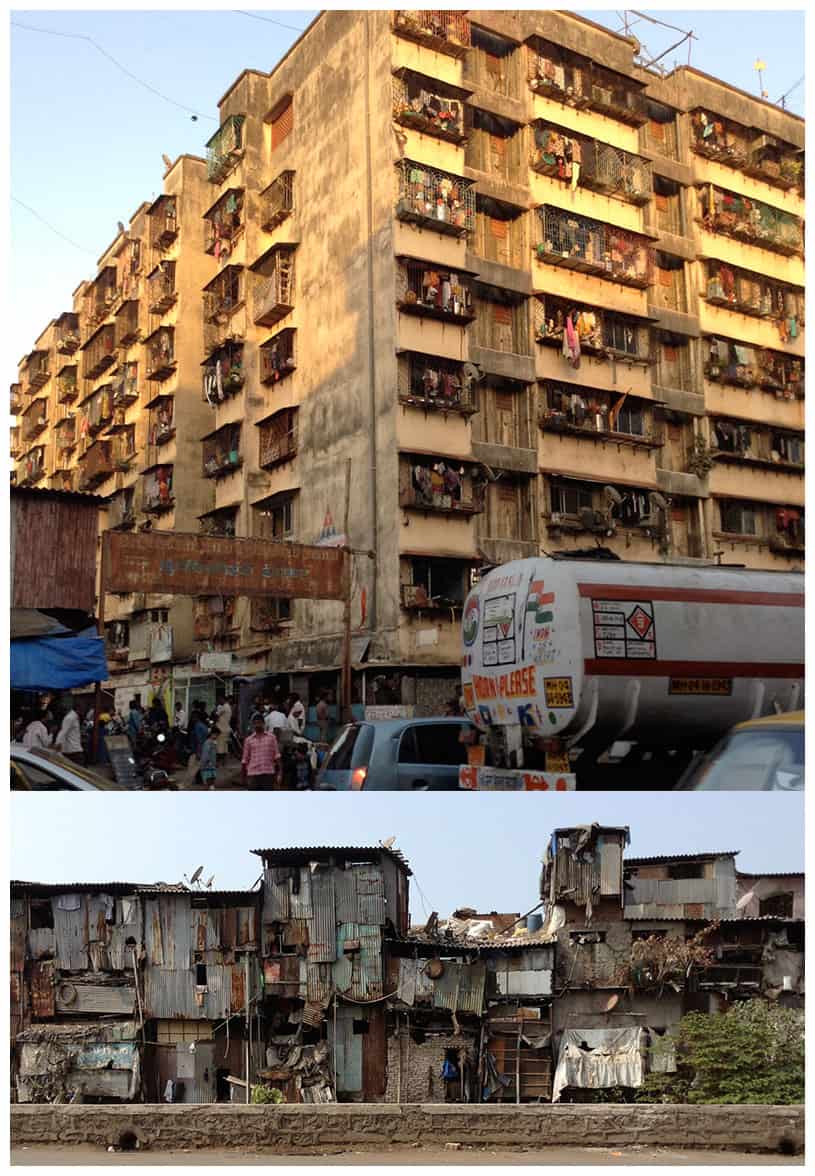 SNEHA, is a Mumbai-based non-profit organization which targets public health concerns, including violence against women.  Organized through SNEHA and supported by the Wellcome Trust, David Orsin and Dr. Nayreen Daruwalla co-created what is now known as the Dharavi Biennale.  “The Dharavi Biennale invites Dharavi residents to meet, educate themselves on urban health, learn new skills, and produce challenging artworks. It is a collaboration between the resident participants and guest artists, scientists and activists to develop locally resonant artworks that are authentic, honest and relevant.” This mission is accomplished through a series of workshops referred to as Art Boxes which are facilitated by guest Mentor Artists. 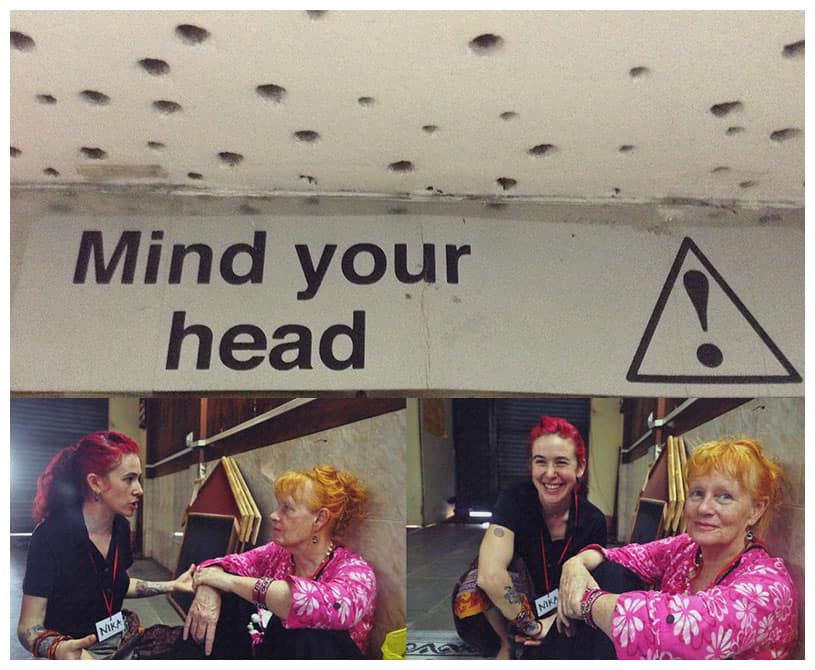 PROVOKE/PROTECT, is the name of the first workshop (Art Box) in which Susie Vickery and I partnered as Mentor Artists.  Sharing a common background in Textiles and Costume/Fashion Design, Susie and I focused the workshop around concepts pertaining to the visual language of clothing.  Utilizing this form of communication, workshop participants were asked to address issues of rape.  The women were encouraged to find inspiration for their designs through commonly recognized symbols/signs/slogans of protection found in their daily life.

This first Art Box was held in a small rental space (which previously, as irony would have it, was an “Adult” movie house for men).  The participating workshop members for PROVOKE/PROTECT were: Nirmala Panjabi, Kismeti Jaiswar, Rutha David, Rupa Sanghati, Anjali Amma, Nisha Bidu, Anita Doiphode, Sheventa Khade, Usha Kharatmal, and Pushpa Parmar.  In addition to the Mentor Artists, other professionals who assisted in the workshop were: Head Constable Smt Akshata Anil Shatye of the Shahu Nagar Police Station; and Dr Nayreen Daruwalla, director of SNEHA’s program on prevention of violence against women and children.  These professional women, provided an education as well as a private forum for candid discussions, questions and concerns in regards to issues surrounding rape.

Inspired with ideas of justice and activism, the women were eager for hands-on introductions to art, craft and design.  Together we worked on concepts of visual communication, having open discussions about what works and the reasons why. 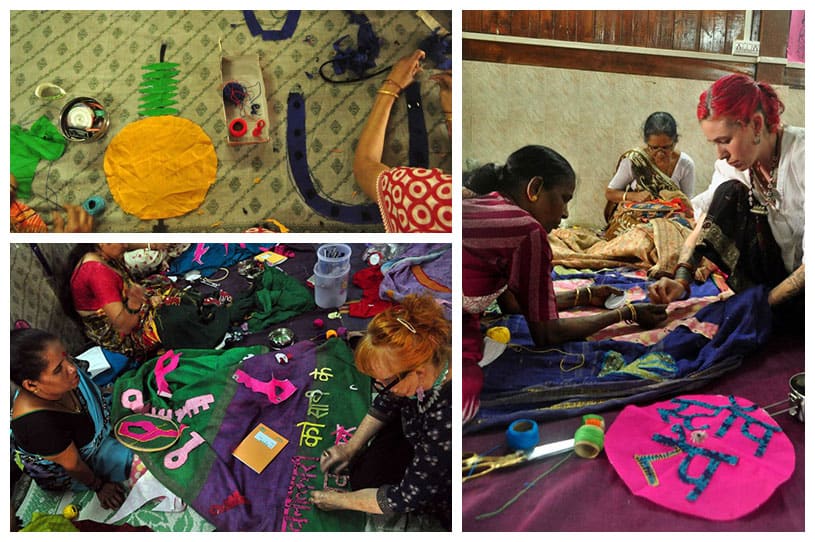 The women were taught basic embroidery stitches and techniques of appliqué. Though some women were comfortable working with needle and thread, others had never used scissors or straight pins before, let alone knew anything about sewing.

There were unforeseen challenges in every way, shape and form but the women’s dedication surpassed all expectation and revealed true artistic talent.

With a focus on the saree, the palu became the blank canvas for the design work.  The palu is the loose end of the saree which drapes over a woman’s shoulder and hangs down her back.  Resembling a cape, the newly envisioned palu emblazoned with anti-rape slogans, turned each woman into a superhero like figure . 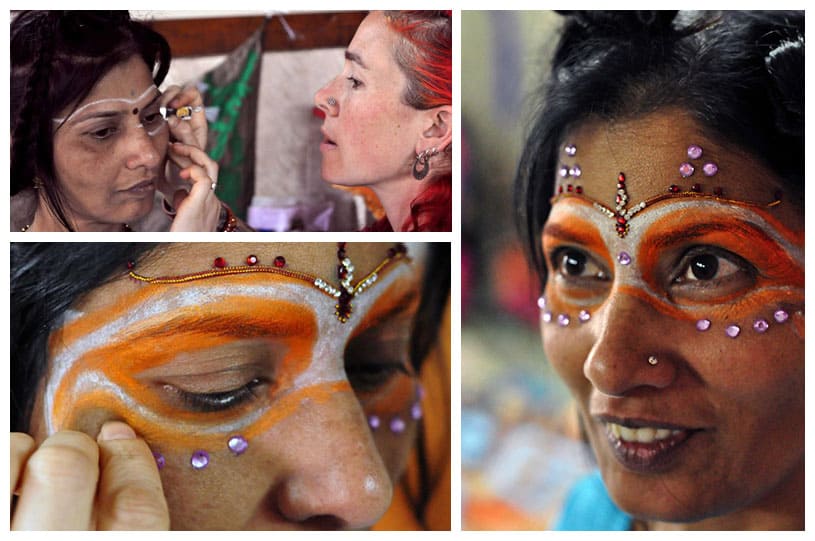 With the sarees complete and new feelings of accomplishment, power, dignity and unity, the superheros took flight to the streets. 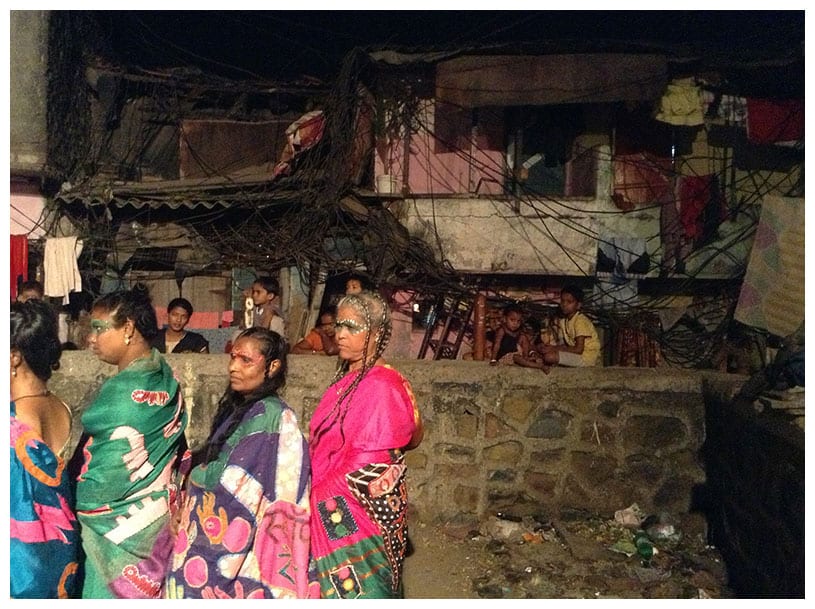 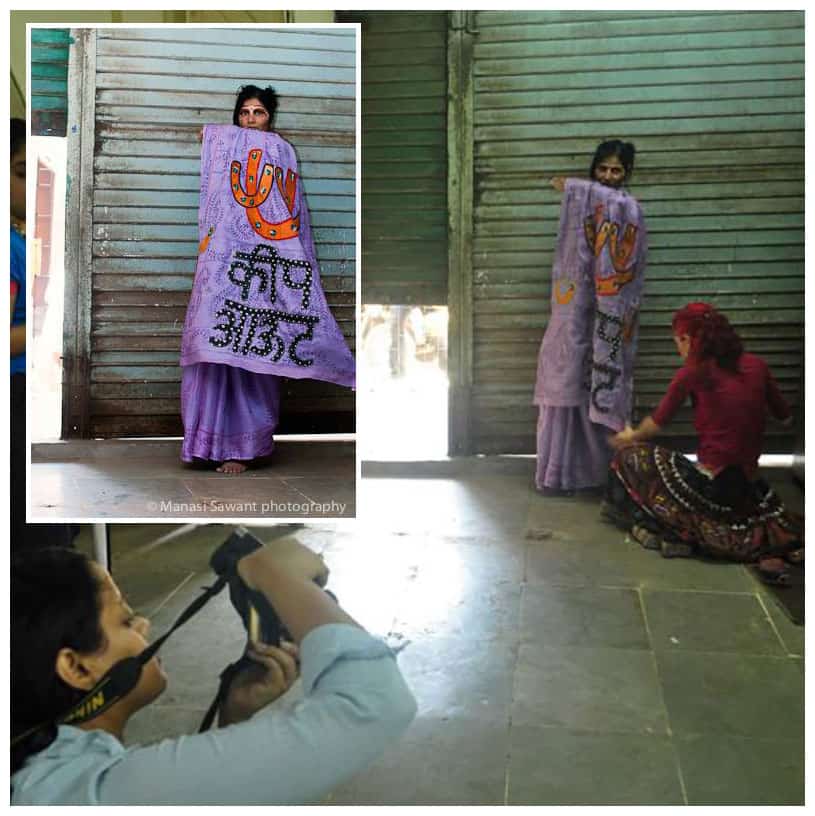 The above photo features Usha modeling her “Keep Out” saree for Fashion Photographer, Manasi Sawant.

In the end, what these women accomplished within the limited time frame of two weeks was outstanding!

Many thanks to Benita Fernando who acted as translator, photographer and blog writer for the Art Boxes of Dharavi Biennale. 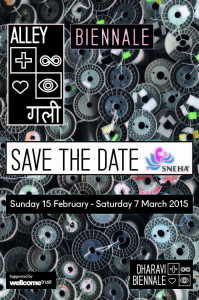 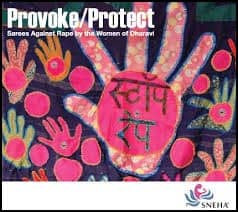 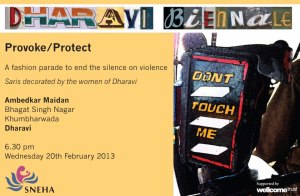 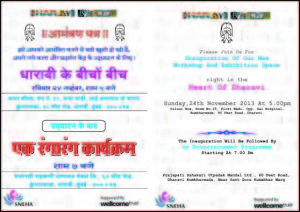 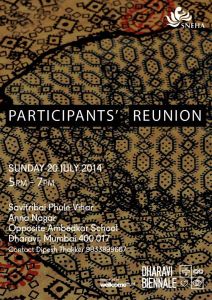 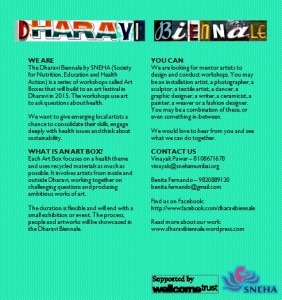 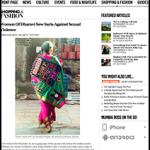 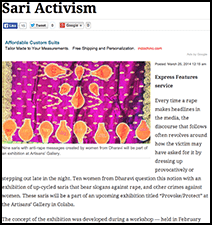 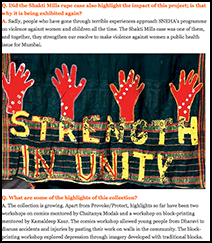 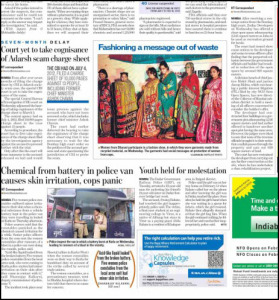 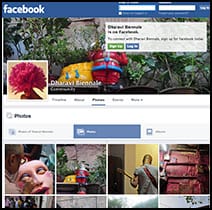 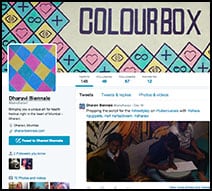 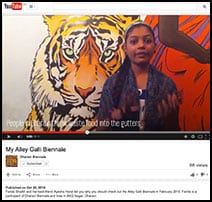 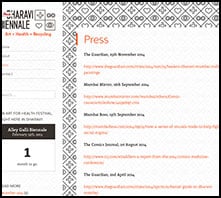